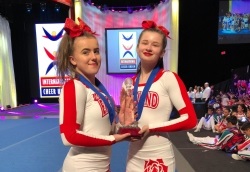 Two of Bay’s high-flying pupils, Katy Wainwright and Jess Belmont, were selected to represent England in the World Cheerleading Championships this April. They flew out to Disneyland, Florida to take part in the elite event and were delighted to secure a Silver Medal in the Junior All Girl Advanced category, where they were competing against nine other countries from across the globe, including South Korea, Austria, New Zealand, Italy and the Philippines.

It is the first time England has taken a Junior Team to the World Championships, and Katy and Jess proved they were capable of competing on an international stage at the highest possible level. With a routine that showcased their gymnastics, dance and tumbling skills, the girls and their teammates delivered an energising and rousing performance, which was thoroughly enjoyed by the thousands of spectators.

Cheerleaders, by their very nature, lead by example, and Katy and Jess are an inspiration – not only to the sports teams they support and the crowds they help to galvanise – but also to other pupils at Bay Leadership Academy, where they serve to demonstrate that the sky is the limit in terms of what we can achieve.