Jess helps spread some cheer all the way to America

A pupil has come third in the United States All Star Federation (USASF) World Cheerleading Championships in Orlando, Florida in the International Open All Girl Level 5 category.

Out of 44 international teams taking part, Jess Belmont and her squad became the first in history from England to take home a bronze medal and World Globe in the prestigious competition which took place in Orlando, Florida.

Year 12 pupil Jess, who is a member of the Bay Stormers Cheerleading Club, stepped up at the last minute to compete with Rising Stars Ellipse from Manchester, when one of their team members was injured. Jess had just three weeks to learn their routine and be ready to compete.

Jess, along with her team, performed a two-and-a-half minute routine to a song which was a special mix created specifically for the team for the season.

“I absolutely love cheerleading, as it is creative and helps keep me fit as well. It has always been a dream of mine to take part in the USASF World Cheerleading Championships. We worked really hard as a team and I’m thrilled to have won a bronze medal. It was totally unexpected as I was called up at the last minute.”

“It is amazing that Jess has been able to use her talent in cheerleading to not just get to compete in the USASF World Cheerleading Championships but to secure a bronze medal. We are so proud of her. It takes a great deal of maturity to juggle both schoolwork and extra-curricular hobbies but Jess has shown others that it is possible.” 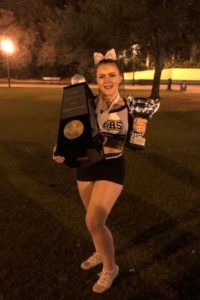