Pupils pay their respects to the fallen at D-Day battle sites. 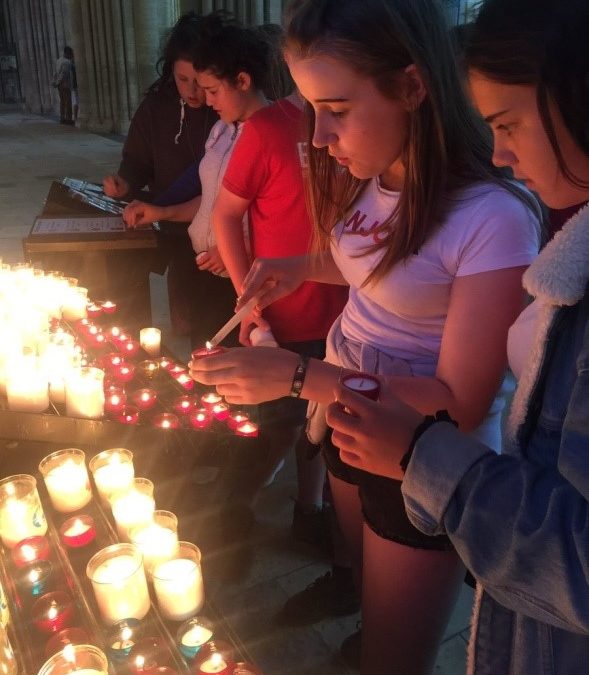 Pupils visited France to learn more about the history of the Allied Invasion on D-Day at the site of some of its most important battles.

The pupils began their trip with a visit to the National Memorial Arboretum in Staffordshire to view the Armed Forces memorial and D-Day memorial, to gain an insight into the scale of loss on the Normandy beaches they would later go on to visit.

They then visited Blenheim Palace to see Winston Churchill’s birth place before crossing the English Channel by night ferry.

The following day, the pupils visited Caen and walked across Pegasus Bridge where on 5 June 1944, a force of 181 men, led by Major John Howard, took off from RAF Tarrant Rushton in Dorset in six gliders to hold off enemy soldiers crossing over the Orne River, as well as Horsa Bridge, a few hundred yards to the east.

Later that day, the stark reality of the soldiers’ task on D-Day, 6 June 1944, was brought to life with a visit to the German Batteries.  Pupils then visited Arromanches, where a portable harbour was erected in the days following the invasion, on which 2.5 million men, 500,000 vehicles and four million tonnes of supplies landed in the following five months. Whilst there, they watched actual footage of D-Day, viewed models of the harbour and saw the remnants that still remain in the sea today. Finishing off the day, pupils visited Omaha Beach, which is still dotted with the remains of German bunkers.

Pupils paid their respects to the 10,900 fallen soldiers commemorated with crosses at the American Memorial and also visited a German cemetery.

Other activities during the trip included visiting Bayeux Cathedral, where they viewed the 70m long Bayeux Tapestry, which depicts the Battle of Hastings in 1066. Pupils also had the opportunity to see the cathedral’s many stained glass windows and vaults, before lighting their own candles in personal reflection.

Nirupa Kirby, Acting Principal of Bay Leadership Academy, said: “It was a visit the pupils will never forget and really brought home to them the ultimate sacrifice that so many Allied soldiers, many only a few years older than themselves, made to protect the freedoms that they have today.”